For all the users of Twilight Render (V1 & V2), to ask questions and get started
Post Reply
13 posts

I have read many topics about light emitting surfaces and that they are favoured somehow over the point/spotlights.

So my question is how to do this?

eg. the twilight can light has a tiny spotlight inside to lit the can and a pointlight to light the scene. How do i use a light emitter for this purpose.

do I need to:
- make a very small cube paint it with LEM material (but wouldn't this be like having 6 lightbulbs all pointing different directions, especially when loaded an IES file?)
- make a small square surface (but how to get decent power as the watts go per m2
- make a small rectangular surface, but again if loading an IES what will be the center of the 'bulb' ?
- make a small triangle surface, ......

The basic thing I don't get is if you have a normal bulb (real life) the light comes from a single source and with the IES characteristics it spreads the light according to it.
So how will this be setup with a light emitting surface and if you have a plane to light a scene, where is this bulb then located and where does the IES originate from?

Not sure if I can make it clear what I escatly mean, not being native in english and trying to explain a technical subject I also don't have much knowledge in....

Hi Ron, this is a very good question. I hope the attached image and scene can help you. All the best,
Please note the color assigned to the light emitting materials in the 2 examples. The color you assign the light can make a big difference for realism. See the Tips and Tricks Section Master List and find/read what you can there about lights, speed of render for different light sources, and about the color of light.

In the case of "Can" Downlights as shown below, I would not suggest the light emitter approach. I would find an IES file from a lighting manufacturer that specifically looks like the downlight you want to represent, and load that into the spotlight. Position it correctly inside the can so that it will light the inside of the can as well, with only one light source, it will look the most realistic, and render relatively quickly in any setting. You can download some free IES lights and see what they look like in the "Freebies" section here. Sorry for the delay, caught a bit up in other stuff so 24 hrs a day were barely enough

Though I did check your example out and it was definitely helpful, thanks for that!

I (of course) still have a few questions:

- So best approach is to use spot/point lights to light a scene and use (invisble) light emitters where additional lighting is needed (eg you pointed out in a previous post to lit the inside of a pool to get caustics out of it)?

- If I use a light emitter and load an IES for it how will the light be affected by the size of the surface? the IES originates from a ver small point and the light will be spread acoording to the characteristics of the bulb with these IES specs. Now if you apply these specs to a large LEM painted surface, how will these specs be applicable?

Regarding Photometric Data on surface vs. inside spot light:
As you may know, IES photometric data like these represent the light distribution of a specific light fixture. So if you have the IES for a fluorescent 2x4 ceiling light, then the IES inside a rectangular light emitter material would be appropriate. If you have the IES data file for a light such as a spot light, or can light, then this would not be as quick to render nor as accurate. So it is advisable to load the IES into the appropriate object.

It is much easier to visualize the distribution of the light from the IES file if you load it into a spot light, as the spot light will change immediately to roughly mimic the IES data. There is no way to pre-visualize this same manner for a light emitting material surface... so it becomes a "wild guess". An IES file loaded into a spotlight will lengthen render times a little in comparison to a standard boring spot light. An IES file loaded into a rectangular face light emitting surface will take more than 2x longer to render.

Regarding Invisible Light Emitters:
You can have it invisible or visible. It depends simply on whether or not you want to actually see the light source. If you don't mind seeing the light source, leaving it as a visible emitter is fine.

Regarding Light Emitters and "Cast Shadow" checkbox:
The "Cast Shadow" check box for Light Emitter Materials is NOT to determine whether or not the light will cast shadows for objects inside the room such as chairs, etc. It is telling the render engine whether or not the light emitter material ITSELF would cast a shadow if OTHER lights shine on it.

IN THIS EXAMPLE you see the identical Photometric IES data file for a strong pendant light from an actual light manufacturer's website loaded into the Light Emitting Surface on the right, and into the down light (can light) on the left.
IES-LightTypeComparison.jpg (81.74 KiB) Viewed 19696 times

Aha, now it starts to make a bit more sense....IES data is not just for a bulb you fit into a fixture, it is related to the fixture itself.... pieces coming together

general rule of thumb?
- light a scene with point/spot lights as you would in real life and load IES where needed.
- If additional lighting is needed (eg the caustics in the pool as previous mentioned topic) then use some (invisble) emitters

you are correct.
I have added some additional information to the above post, please review.

Case closed, at least for now

I should have mentioned, there is a very nice comparison of these lights you are asking about done by Frederik (and me) here. 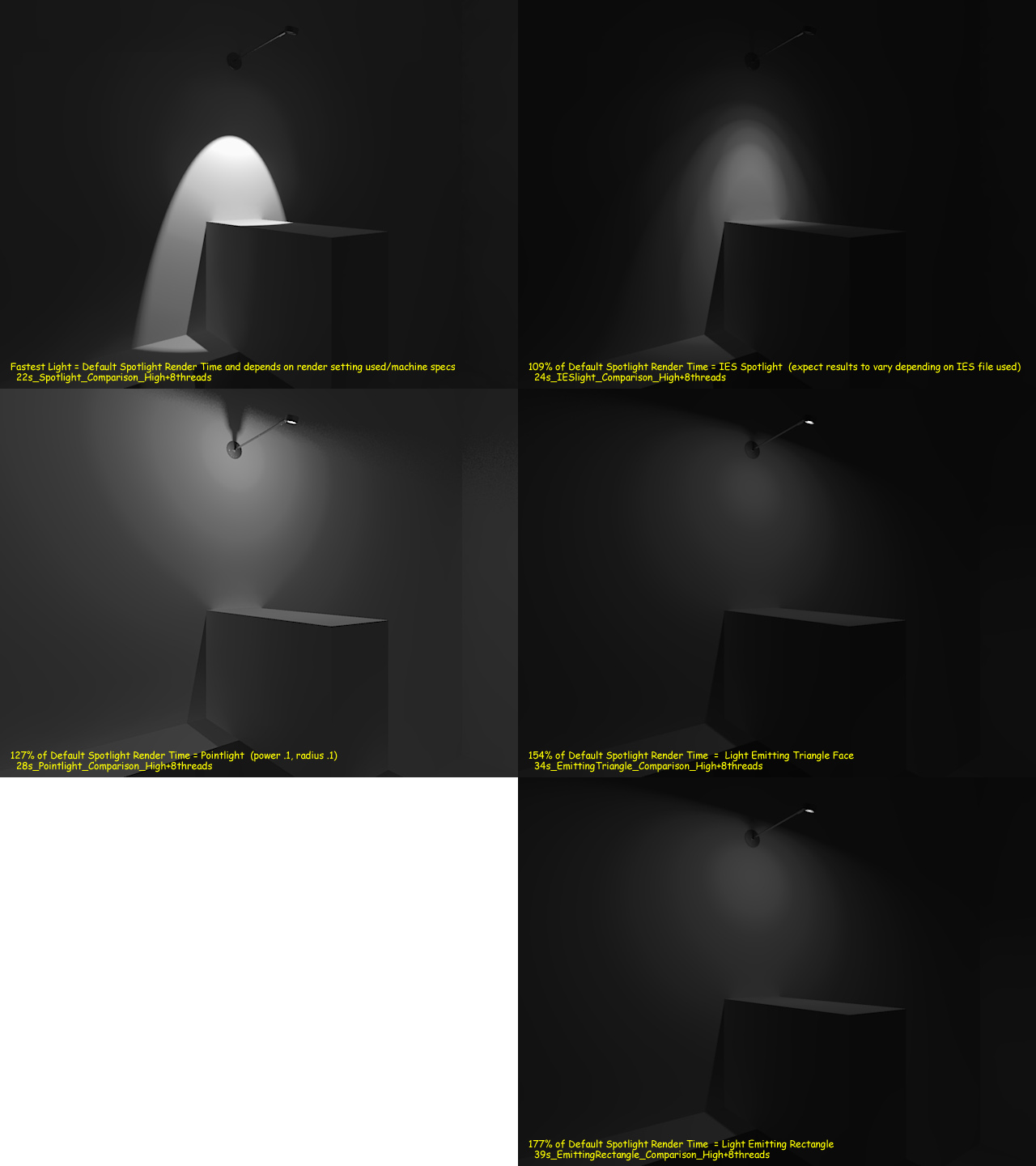 Yeah, saw this one before and used the info as well (actually been through the whole forum almost post by post as many subjects are very useful, not only for lighting but for anything!)
Though it did not answer my remaining questions, which are now.

Will be around, so I hope you are as well in case I am stuck again

Users browsing this forum: No registered users and 21 guests